After four years without qualifying for the Champions League group stages, Celtic will be looking to be back amongst Europe’s finest as they prepare to take on FC Midtjylland. Calum Macaulay previews what will be Ange Postecoglou’s first competitive match with Celtic.

It has been four seasons since Celtic’s last qualification to the Champions’ League group stages. In that time, we have seen the Glasgow side lose in the third round of qualifiers to AEK Athens in 2018/19, exiting in the same round the following year in an infamous bottle crash against CFR Cluj, before an embarrassing second round defeat to Ferencváros in last year’s qualifiers. There is a clear pattern in the board’s attitude regarding these qualifiers. The match against AEK Athens was played with Tom Rogic starting at left wing. Celtic went into the game against Cluj with a clear need for a centre back and left midfielder, playing Lewis Morgan on the wing for the first leg, and Callum McGregor for the second. This came after the club received £20m for Moussa Dembélé the previous summer. Celtic went into the Ferencváros game having not properly replaced Kieran Tierney, who was sold the season before for £25m, and with Ryan Christie starting up-front. Every season Celtic go into the qualifiers hoping to sneak themselves through without making any desperately required signings , as we needlessly gamble Champions League football, and the £30million prize that comes with it, by forcing ourselves to play players out of position to fit a system. This year, Ange Postecoglou’s men go into the qualifiers with a defence fit for a bottom-half Premiership side.

Luckily for Celtic, Midtjylland have plenty of problems of their own. The Danish outfit go into the game having lost their first game of the season to Odense Boldklub, who finished eight last season in the Danish Superliga. Midfielder Frank Onyeka missed the match and awaits a work permit for his move to newly promoted English side Brentford. His midfield partner Jens Cajuste was also out of the squad, with many clubs interested in the youngster, including Brentford (it might be worth noting that the clubs share an owner in Matthew Benham). Ange’s countryman Awer Mabil, who The Hoops manager described as a “great young talent” earlier in the summer will also miss the game due to being given an extended leave from pre-season. There are also reports that striker Sory Kaba has played his last game for The Wolves and is likely to move back to Spain, where he played for Elche in the 2016/17 season and then again in 2018/19. Celtic will welcome back Erik Sviatchenko to Celtic Park after the player made 63 appearances for the east end side, as he will captain Midtjylland tonight.

Kristoffer Ajer has been left out of the 25-man squad for the tie, meaning he is likely to be sold soon enough. With Christopher Jullien injured, it leaves Celtic with a defence that would make the most optimistic of men fearful. Playing Anthony Ralston in a Champions League qualifier in 2021 is a cardinal sin, yet something that could have been completely avoided if the board had planned ahead, rather than looking to scrape through with the bare minimum. New signing Liel Abada has also not been included in the squad, reportedly due to an issue with his work permit. If Celtic manage to beat Midtjylland over the two legs, they will have one of PSV or Galatasaray waiting for them, and looking at the squad, I am only half-joking when I say it would be a bigger achievement than ’67 if Ange got us through to the group stages. However, victory over Midtjylland guarantees Celtic a place in the Europa League group stages, which I am sure the vast majority would settle for at this stage. 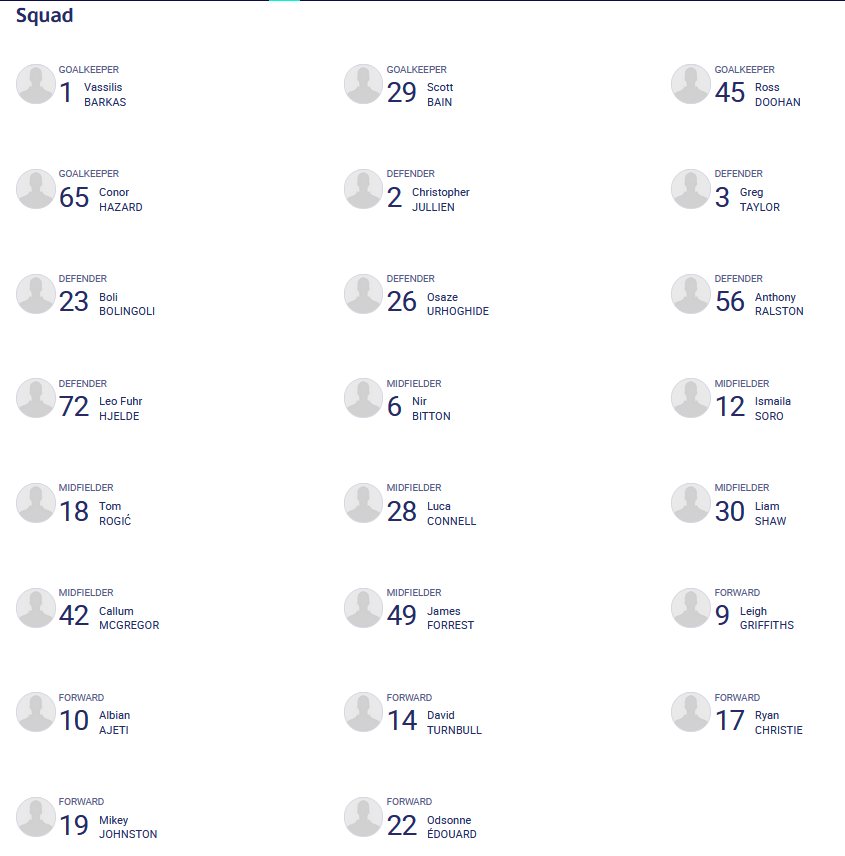 With all that said, it is not all doom and gloom for Celtic this season – Kyogo Furuhashi looks a real player, reaping praise from Japanese fans and Andrés Iniesta alike. Carl Starfelt also looks to be a good signing, with renowned football journalist Fabrizio Romano claiming the Swede has been signed for £5m. However, it just feels like the same old story for Celtic going into the qualifiers. Signing players after we have already been put out the competition, yet not strengthening the positions that have been our weakness for years. It has been two years since Tierney and Mikaël Lustig left the side, yet they have still not been suitably replaced, having received a record amount of money for a Scottish player in Tierney. After a summer of zero preparations, all Celtic have left to do is hope and pray, as we are set to endure what is almost guaranteed to be a terrible game of football.

The 2020 Tennis Season in Review